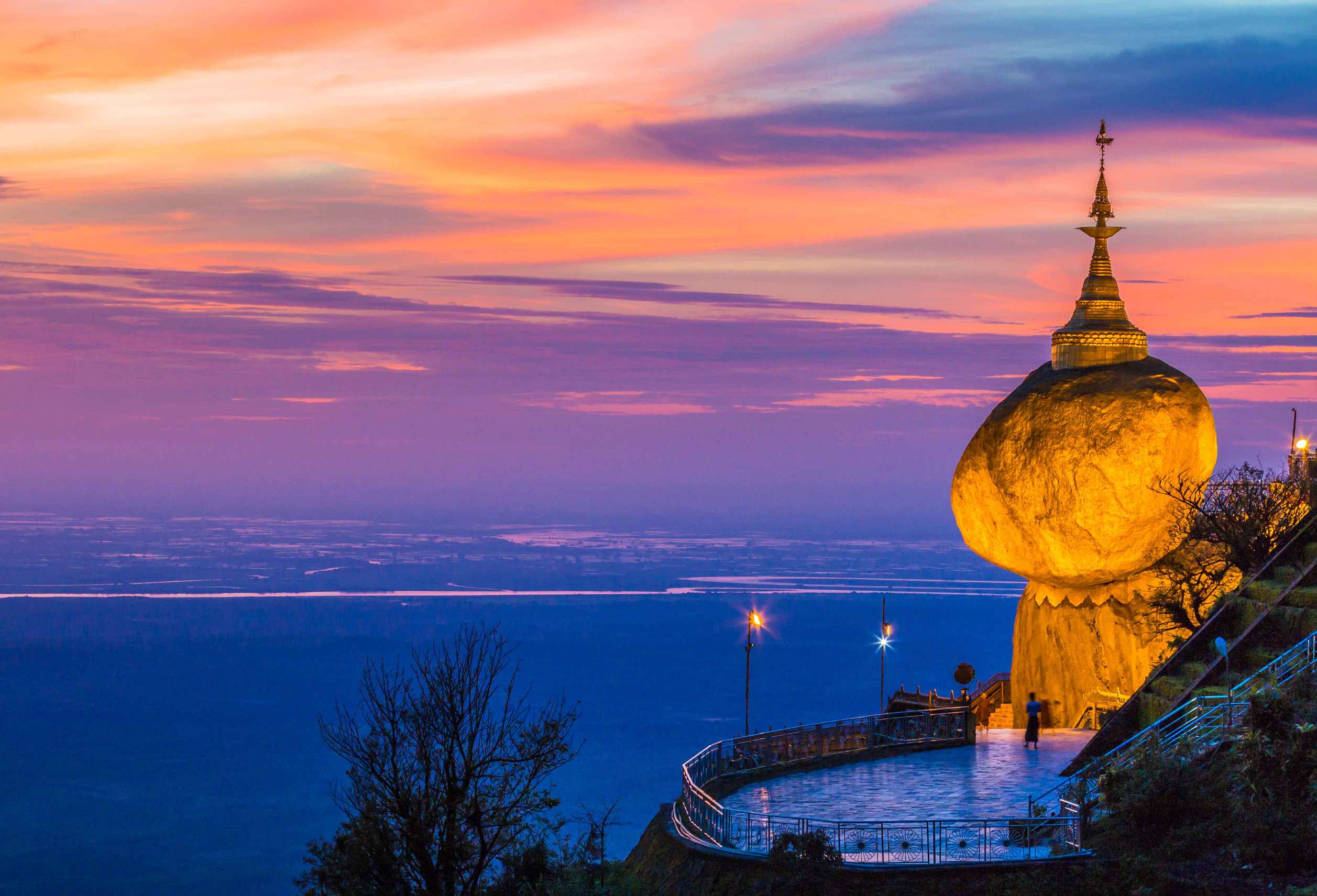 How To Get There:  Mon State has a bit of wonderful golden temples, pagoda,historical sites, colonial buildings, and scenic coastline. Travelling in this region is easy and accessible by car and train from Yangon and Nay Pyi Taw. Kayin State is known as the land of the caves.  In Kayin State, the plains are dotted by limestone caverns and limestone hills like Mt. Zwekabin protruding steeply upwards. There have many attractive limestone caverns such as Sadan, Kawgun etc. Kayin State can easily access by car from Yangon and Nay Pyi Taw.

Myawaddy is a town on the Thai border with the newly-built road which connects Myawaddy with the rest of Myanmar, passing through the beautiful Dawna mountain ranges.

Thandaung was developed as a hill station during colonial times by the British and Mottama was captured by the British in the First Anglo-Burmese War of 1824–1826. Thandaung is a very beautifulhill station and an important tea, coffee and fruit producing region.

The two famous caves in Kayin State are BayinNyi cave and Kawgun Cave. BayinNyi Cave is in quite a large complex with hot springs at the base of the hill. In Kawgun Cave, thousands of tiny clay Buddha images and carvings, some dating back to the 7th century, can be seen mounted on the walls and roof of the main cave.  Other eight caves can be found in KayinState,namelySaddan, Phakat, Htaungwi, Yathaepyan, Wepyan, PathoneKhayone cave and Kokka-thaung Caves.

Mawlamyine is the capital of Mon state with a charm of its own with its rich history, buildings with colonial style architecture, and World War II era wooden buses. The town’s landmark KyaikThanLan pagoda was built in 875 A.D. KyaikKaMi was a small coastal resort and well-know for KyaikKaMiYele Pagoda, a metal-roofed Buddha shrine complex perched over the sea. Kyaik Ma Yaw Pagoda, a temple of serene, white-faced Buddha was built by Queen Shin Saw Pu in 1455.

Thaton was also known as Suvannabhumi. It bears rich significant   in Myanmar’s

history as it is one of the places where Theravada buddhism was established and took root some 2500 years ago. Other interested places in Mawlamyine include BiluKyun, Setse beach, Sein Yin Hmyaw Pagoda that is very popular Buddha temple and Win SeinTawya.

Shwe Yin Myaw Pagoda is located on the bank of Thanlwin River in Hpa-An town of Kayin State. The pagoda is the most famous in Hpa-An, and a favorite spot for tourists in watch the sunset. People visit Shwe Yin Myaw Pagoda and learn why the city is called as Hpa-An. Legend has it that Hpa-An was created by a dragon and a giant frog. The impressive statues of these figures can be seen in the pagoda’s compound.

Mt. Zwegabin, at 722 m high is one of the most sacred mountains in Myanmar, with a monastery at its peak. Getting to the top requires a challenging two hour climb up a steep staircase. There is a monkey feeding event every day at around 11 am. Legend has it that there is a strand of the Buddha’s hair enshrined in the pagoda. At the foot of the mountain, thousands of large statues of the Buddha can be seen.

KyaukKaLat is a pagoda perched atop a sheer rock that rises out of an artificial lake. It is topped with a golden stupa making it unique. It was built near Hpa-An and surrounded by mountains and farmland. From the rock there are great views of the surrounding countryside and near by Mount Zwegabin. Many people visit to enjoy the sunset from there.

KyoneHtaw waterfall is next to Htiklawtho and is located at HlaingBwe town in Kayin State. KyoneHtaw waterfall is surrounded by a pristine forest. The waterfall is becoming a popular attraction for both local and foreign tourists who are drawn by the naturally green-coloured water. The best time to visit is at the drier times of the year.

The State where Theravada Buddhism was established and took root

KyaikHteeYoe Pagoda, known as Golden Rock was built in 574 B.C according to the legend. It lies 229 km far from Yangon and built on a huge boulder which stands on the extreme edge of the cliff, 1095m above sea level. The rock and the pagoda are at the top of Mt. KyaikHteeYoe. It is the third most important Buddhist pilgrimage site in Myanmar after the Shwedagon Pagoda and Mahamuni Pagoda.

Kyaik Paw Law Pagoda is located in Kyaikhto township of Mon state. This pagoda is well-known because of the living mole on the face of the Buddha image. The eyes of the image are alive. The image was trying to move by elephants, horses, and men but was not able to move. The image is said to be floating on water. No matter how many times, the mole on the Buddha’s face is offered with gold foil, it never fades away. The image is always facing to the region where Sri Lanka exists.

The ShweSar Yan Pagoda is said to have been built in the 5th century B.C enshrining four tooth-relics of the Buddha. It has been built over and has now assumed a modern shape with a circular base and a bell-shaped super structure. It consists of three high square terraces and a bell. The lower base is 104 ftsq and 18 ft high while the upper terraces are proportionately diminished in size. The third storey and the conical superstructure have been rebuilt and the whole building was renovated from time to time.

KyaikThan Lan Pagoda was erected in 875 A.D during the reign of King Mutpi Raja. A hair relic of the Buddha, Tripitaka manuscripts and gold images of the Buddha were enshrined in the pagoda. In the years that followed, successive kings raised the pagoda higher and higher until it reached a height of 46m from its original height of 17m. The base of the pagoda at present is 137m in circumference and right around it there are 34 small pagodas called Zediyan. The platform has two big bells dating back to 1885.

Mon State covers the upper part of the Tanintharyi Peninsula. It consists of islands, hills, tropical forest, crop land and plantations. Mawlamyine, Myanmar’s fourth largest city, is the capital of Mon State. Kyaikhtiyoe (Golden Rock) Pagoda is located to the north of Kyaikhtotownship. Thaton is the capital of the ancient Mon Kingdom, dating back to before the Kingdom of Bagan. There are beautiful beaches in the area, including at Kyaikkami and Setse. Thanbyuzayat, 60 km to the south of Mawlamyine, there is a war memorial to the 100,000 POWs and civilians who perished during the construction of the so-called “death railway” at the hands of the Japanese during WW II. The railway was made infamous by the epic 1957 film “Bridge on the River Kwai”.Kyaik Than Lan Pagoda, built in AD 875, is thought to be the setting where Rudyard Kipling wrote his famous poem, ‘The Road to Mandalay’. Win Sein Taw Ya, is the site of the largest reclining Buddha statue in the world. KyauktalonTaung is a flat rock formation 91 m high with a Buddhist shrine situated on top of it.

Kayin State, also known as Karen State, covers a total area of 11,731 sq km. It shares borders with Mandalay Region and Shan State to the north, Kayah State and Thailand to the east, and Mon State and Bago Region to the west. The capital is Hpa-An and Mount Zwegabin is its most famous landmark.  Thandaung is a picturesque hill station in the north of the state that is developing into a popular resort town.

Kayin state offers many scenic spots comprising of hills and rivers, and farmlands. Lumbini Garden, on the western side of the Mt. Zwegabinmountain, is the most popular place to start the ascent, and is home to over 1100 Buddha statues.

Sadan Cave can take 10 or 15 minutes journey to through the cave, which exit into a lake and paddy field view. Thousands of miniature clay inside Sadan Cave.